I bought my first Chihuahua in 1969 and have been showing and breeding them ever since.  Chihuahuas are my passion and the only breed I have been actively involved with.  I have been judging them for the last several years.  It has been my great pleasure to give seminars and mentor at shows in many areas of the country.

One of the things that comes up frequently during seminar discussions is how to prioritize various aspects of Chihuahuas.  Many people have said that Chihuahuas are a “head” breed.  I agree that head is a very important part of being a Chihuahua, but our breed is so much more than that.  To give a little historical perspective and help with prioritization, I like to reference the point system.  When the standard was revised in 2008 AKC discouraged including a point system.  It is certainly understandable with some standards that had three points for eyes, two points for nose, one point for each toenail, etc. etc.  A little exaggerated but to make a point, these point systems were unworkable and without practical value.  The Chihuahua system was different in being broader in scope and, I believe, helpful in pointing out what the writers of the standard considered to be important.  It was divided into five equal parts:

As you can see head accounts for 20% when judging a Chihuahua and after judging dogs throughout the country the last few years, I believe we are in good shape in that area.  Generally heads are round domed with good muzzle length, although I have a little concern about the tendency of ears and eyes being a bit small.  Below is a photo of one of the most beautiful Chihuahua heads I’ve ever seen. 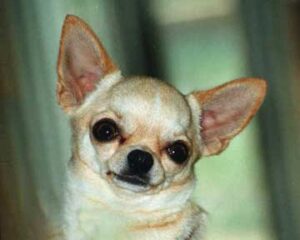 Please note the large ears set at a 45 degree angle when in repose, the large, round expressive eyes, and the perfectly “apple domed” skull.

Likewise coats are correct in the majority of dogs.  There is a disqualification in LONG COATS ONLY for too thin coat that resembles bareness.  I’ve only ever seen one such dog so not a problem in the modern Chihuahua.  I am also not seeing dogs with excessive undercoat that resemble Pomeranians.  Some undercoat is preferred along with nicely fringed ears, full plumed tail, and good feathering on legs and pants.  Smooth Coats can be close or with undercoat.  Rough on the neck and furry tail are preferred.  Unfortunately many handlers are cutting off the rough and grooming the tail so it looks more like a Beagle.  The area I see the most room for improvement is body/tail to which I include proportion.  The standard states that Chihuahuas should be slightly longer than tall when measured from the point of the shoulder to the buttock and withers to the ground.  A number of standards call for slightly longer than tall.  For me it is a little vague and open to interpretation.  The Chihuahua standard includes two other words that I think are more defining:  compact and off-square. 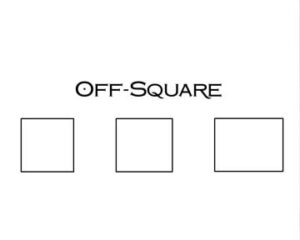 I use the above diagram in seminars.  The box on the far left is a square and the one on the far right is a rectangle.  The center box is what I consider to be off square, yet the majority of Chihuahuas in the ring today appear like the box on the right.  Sadly some are balanced more like mini Dachshunds.  Too often a correctly balanced Chihuahua looks like the odd man out.  Below are two examples of correctly balanced Chihuahuas.  The smooth is a bitch and the long is a dog. 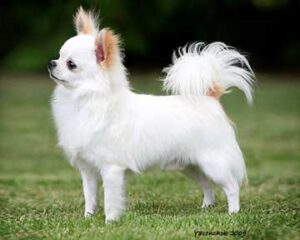 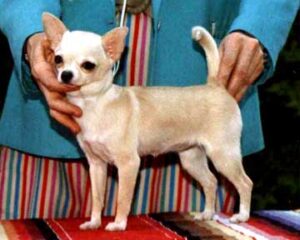 Shorter bodies are preferred in males, but even a bitch should appear compact.  In the last few years I’ve been seeing some dogs with very incorrect tails in the ring.  A correct tail is carried out (not seen too often), up, or in a loop over the back with the tip just touching the back AND NOT BEYOND.  The tails where the tip ends next to the ribs or those that lie flat on the back are wrong and distracting.  Since the coat on the tail of the longs can be quite long and drape beyond the level of the back, a more careful exam on the table may be necessary.

Legs and movement in toy breeds are always a challenge.  I think Chihuahuas have come a long way in the last ten years in both areas.  Yes, there are still a good number of dogs with crooked fronts, lack of rear angularion, and poor movement but there are many, many examples of dogs that have beautiful legs and sound movement.

I’d like to address general appearance from the perspective of showmanship and the physical examination.  Chihuahuas are a very small breed and the exam tables are high in comparison.  You might have some trepidation looking down from the edge of the roof of your house so don’t be surprised if a Chihuahua doesn’t enjoy the table.  Yes they should stand and not exhibit aggressive behavior but don’t let lack of perfection on the table stop you from putting up a beautiful Chihuahua.  Chihuahuas are generally aloof with strangers so don’t try to become their best friend by putting your face at their eye level or baby talking.  Do a professional, straightforward, gentle exam.  Having the handler show bite at the end of the exam works wonderfully.  We encourage that most of the time assessing a class be spent with the dogs on the ground.  If it is necessary to recheck something, ask the handler to put the dog back on the table rather than towering over it on the floor.

Since the Chihuahua standard mentions terrier-like qualities in the first sentence, we are sometimes asked to “spar” our dogs.  We ask that great care be used in doing this in your ring and at ANY sign of two dogs not getting along, stop immediately.  A good Chihuahua temperament is one of interest, confidence, and self importance with a little bit of sauciness thrown in.  Chihuahuas generally recognize others of their kind and interact in a positive manner.  If you are bringing several Chihuahuas together to interact and one or more just keep gazing up at their handler, please do not penalize that dog(s) for not participating.  It is exhibiting the devotion to owner Chihuahua people value.

We are also asked on occasion to pick our dogs up so the judge can have a closer look at and compare heads.  This is perfectly acceptable and I often do it especially for close decisions.  Since Chihuahuas are so loyal to their owners, one word of caution would be to look only and not touch while the dog is being held so close to the owner/handler.

Ther is a weight disqualification for Chihuahuas.  Any dog over six lbs. should be disqualified.  As long as it is six lbs. or less there is no preferred weight.  It is impossible to determine if a dog is right at six lbs. or over by an ounce just by looking or even lifting (which should never be done).  Please do not ignore a beautiful Chihuahua because you think it might be over six lbs.  Weigh the dog and if it is in size, reward it.

There are several other disqualifications and serious faults in the standard that I don’t have the space to discuss here.  Please read the standard, attend a seminar, or find a good mentor to learn more.  Our next seminar will be at our national specialty in St. Louis the second week in October.  In conclusion, please judge according to the standard and not to the preponderance of what is being exhibited.  Often a truly outstanding Chihuahua will look different than anything else in the ring.